Hair Horror: How Thinning Hair Led Me To Embrace My Blackness 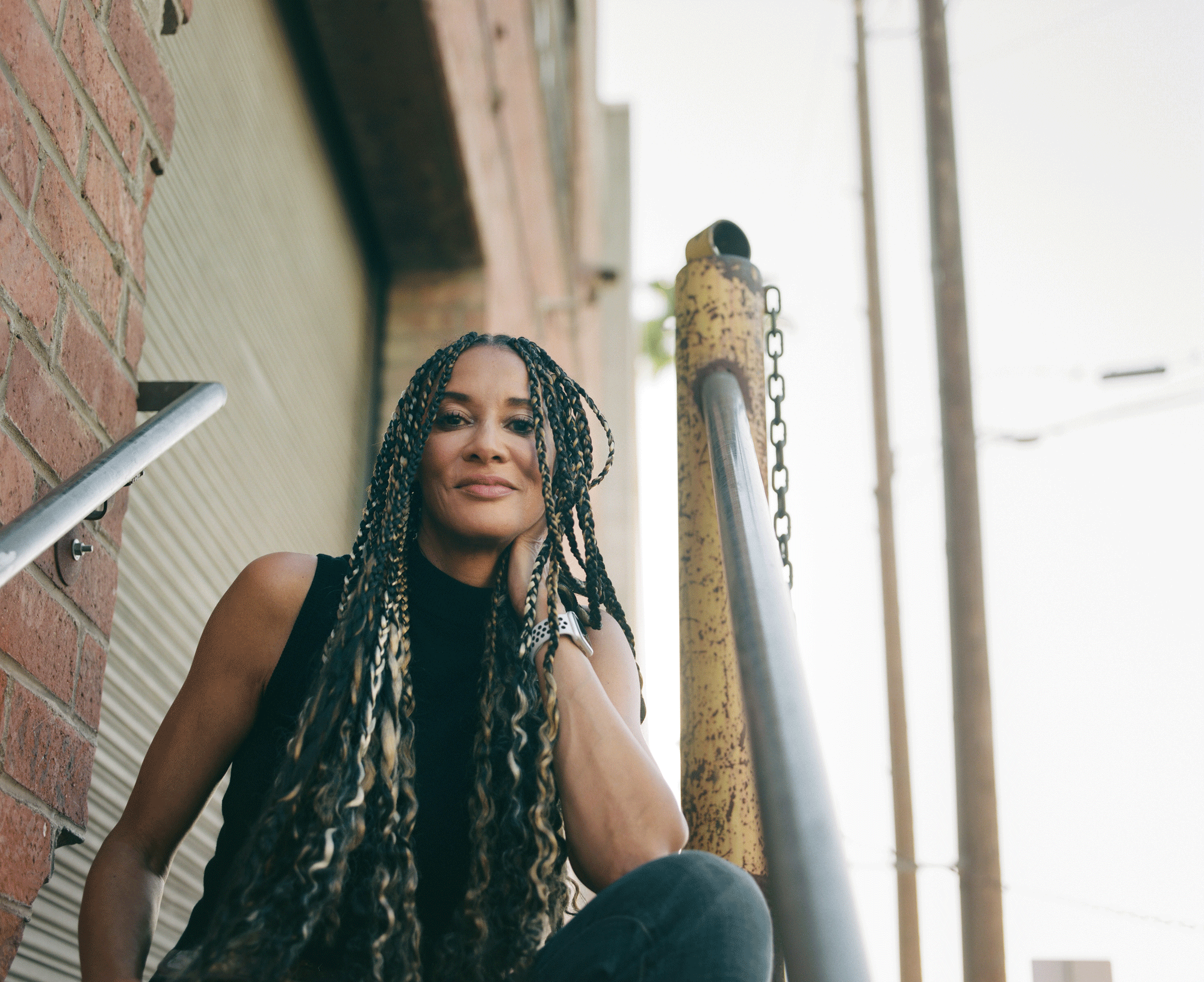 I was fourteen when my family moved from Cambridge Massachusetts to Berkeley California.  In Cambridge I had gone to a small, primarily  white, independent school, where the other two Black girls in my grade had hair like mine - kinky curls that our respective mother’s greased, pulled and brushed into two braids that hung right at our shoulders. When we got to Berkeley, I decided that to ensure my popularity at my first public school, I needed to walk on the campus that first day looking like someone that everyone wanted to be friends with. My only TV references for high school life at the time were Happy Days and Good Times.  Happy Days had an all-white cast and was set in the 1950’s. Good Times had an all-Black cast, dealt with current issues, and guest-starred Janet Jackson as Penny. But most importantly, Good times had Thelma. Thelma was the sexy, afro-wearing, booksmart and impossibly cool middle child and only daughter in the iconic Evans family. She was a daddy’s girl, a good girl and the girl that everyone I knew wanted to be.

I needed to be Thelma.

So, I cut an inch off each braid and laboriously picked my floppy hair out into an afro. Going to school the next day with my afro and my new school clothes (baseball tee and dark denim bell bottoms - I remember!) I was so fly, you couldn’t tell me nothin’.  But the moment I entered the quad where all the cool kids hung out on the picnic tables, I understood that I had made a grievous error.

The Black girls on campus didn’t have afros or braids, they all had hair like white girls. Straight, shiny hair that shook and shimmied and bounced around their shoulders when they walked. Boys of all races worshiped at the altar of their much-coveted picnic table near the vending machines. These Black girls had their own soundtrack, blasting Chic and Michael Jackson from an ever-present boom-box and nodding ever so subtly along with the music. I watched those girls like they were on exhibit, covertly following them to their lockers and through the hallways to try and figure out if there was another secret to their swagger, another thing I could buy or procure to make myself more like them.

When I got home, I stared at my round, spongy afro in our small bathroom mirror.

How can I convince my mom to give me the money so I can have hair like those other sistahs at school? Hair that will ensure that I’ll have a seat at the (picnic) table, or at least get a head nod in the hallway.

My mother wasn’t down financing my trading my authentic hair for popularity.

“Why would you want to mess with your beautiful hair?”
I really wanted to see myself like she saw me, so I tried to put my self-hatred aside. But I couldn’t let go of the notion that I would be infinitely more desirable if my hair looked like everyone else’s.

I wish films like Justin Simien's 'Bad Hair,' were around then. Bad Hair is about a woman whose weave is possessed by an evil spirit, and the opening scene illustrates the pains Black women endure to have "fake hair like Europeans" (as the great Lauren Hill says). I might have taken a different path.

But instead, in my sophomore year, I took two buses to a salon in Oakland and used all my allowance to have a fortyish white woman with a pompadour give me a virgin perm (a lye-based relaxer on hair that has never been touched by chemicals).

My friend Dana had assured me that it was worth the $75.00 I had to come up with, but she didn't tell me that they would have to slather my roots and hair with a noxious, searing  compound that could double as paint remover. My eyes watered when she started, not just from the sharp, sulphuric smell, but because it felt like my scalp was on fire. As I sat in the chair, I told myself that I kept silent because I was too embarrassed to let her know that I was so “tender-headed”. But later on, I acknowledged the truth to myself. I was quiet because I wanted the purported results more than I wanted the pain to stop.

I needed that white girl hair.

Three hours and one greenish, pussing scalp later, I emerged triumphant, hair swinging and bouncing around my shoulders. I was Jayne Isacc Kennedy. I was Farah Fawcett.

But it didn't last.

Two weeks later, it turned on me, becoming a scabby, dry, and brittle mess. No longer did I have curls that moved independently of my head.

When I was twenty-two, my brittle hair and I moved to Los Angeles for a job, only to discover that LA women were taking their hair game to new levels. Here they weren’t just relaxing their hair, they were actually sewing other folks hair on to their heads and passing it off as their own.

After I got over the shock of what I was seeing, envy set in again. But a weave required regular upkeep and I couldn’t afford weekly visits to the salon. So I bought and used every “Miracle Gro” product that promised long, lustrous hair.  A few months later, I’d spent all my little money useless goo and my hair still looked like a helmet. In a fit of desperation, I found myself at a local cosmetology school (services were free on Thursdays) telling a beauty student l that I wanted it all cut off.  Shame and defeat tasted bitter in my mouth, as she sat me in the chair, but I tried to keep a brave face.  Looking back, she gave me a super cute, curly pixie. But instead of feeling myself as I walked out that day, I saw my short hair as a sign of failure and rushed home to try on different hats (and a wig I found at a yard sale).

A few years later, I gave my rent money to a stranger for some new thing called individual extensions. For six straight hours, she pulled, snatched, and braided my hair, and that night I walked out of her apartment with tight, throbbing temples and hair that swung from side to side. I couldn't stop looking at myself. This silky, wavy, store-bought hair was the hair I should have been born with.

But by age thirty, the braid woman had moved away, and the upkeep of my extensions was more than I could afford. Also, my pride was hurt every time I had to lie to one of the curious people who had the nerve to stop me and ask, "is that your real hair?"

So I decided to give up on my dream of silky, shiny long hair and do the best with what I had. But I still secretly felt less desirable because I didn't have hair I could jump out of the pool with or that I could shake loose from a ponytail after a workout.

Then, a decade later, the impossible happened; I tried the new trend, The Brazillian Blowout. Two years in, my hair was long - thick, healthy, and silky, and it fell past the middle of my back! It was longer than the longest it had ever been. But one evening, while I was admiring my hair with a hand mirror in the bathroom, I saw a patch of scalp on the back of my head where there should have been hair.

My dermatologist seemed pretty confident that my thinning hair was stress-related but wanted to run some tests to rule out alopecia. When the alopecia test came back negative she  suggested that I stop the Brazillian right away, “just to be safe”. I bit my lower lip to keep from bursting into tears right there in her office.

It's not fair! If my hair loss is stress-related, then why would I need to stop the Brazillian??? Especially now when I've finally found a way to have the hair I've always wanted?

But I was (slightly) more terrified of losing all my hair than losing my prize length. So my hairdresser and I made a plan to grow out my natural hair, cutting off an inch or so every six weeks. I held a box of tissues in my lap when she cut those first few inches. I was so embarrassed to be crying in front of her, but I was grieving.

Grieving the loss of an ideal. I would no longer see the person I wanted to be in the mirror.

Last year, the state of California took legal action to ban discrimination against hair like mine. Hair that naturally grows on the head of black individuals. The fact that this is now a universal conversation confirms the thing I think I've always known:

Aside from being one of the first things you see on a person, hair is also a form of expression. And especially for Black women, our hair is our history. Several times in my life, I'd made a decision to try and accept my hair, but I'd never really made a decision to love it. Four years ago, when I was on my way to an event, I caught my reflection in a mirror and stopped short, doubling back.

My hair was full, curly, and healthy.

My hair was springy and shone with natural butters and oils.

My hair was resplendent with highlights from the sun -- like a halo or crown.

I was so shocked that I just stood there staring at it until my boyfriend came downstairs and asked me what was going on.

I've always been an advocate for equity, inclusion, and justice when it came to race matters. But I noticed that I felt more Black when I walked into a room with my natural hair than I ever have before. It seemed like sometimes people mistook me for someone who might be striving to be more -- racially ambiguous when my hair was straight. With my natural hair, there is no danger of that. I discovered that my Blackness is the first and last thing I want people to see when they see me. My Blackness is the thing I want them to remember. And in 2020, my hair became a beacon, a rallying cry, a symbol of my allegiance to the cause.

White people call my hair an afro and want to pat it or bury their fingers in it (by that way, that's a firm no, even if you do ask first). But I don't think the way my hair grows out of my head needs a label anymore than straight hair does. If my hair is an afro, then it only seems fair that we have a name for how white people's hair grows out of their heads. Or maybe we don't -- and we just agree to call it all hair.

Back to Bad Hair, I felt like the film asked many the right questions, like why is long, silky hair the societal standard of beauty? And why do we Black women continue to torture ourselves with straightening products, weaves, and extensions ordered to feel accepted and valued? It's a strange thing to say, but I'm grateful that my hair started thinning six years ago. If it hadn't, I might still be the woman who pays monthly to have her coarse, wooly curls tamed into submission. And I might not have ever discovered the power and beauty of my natural Blackness.

Learn more about Laura and her work: https://theonlyonepod.com/